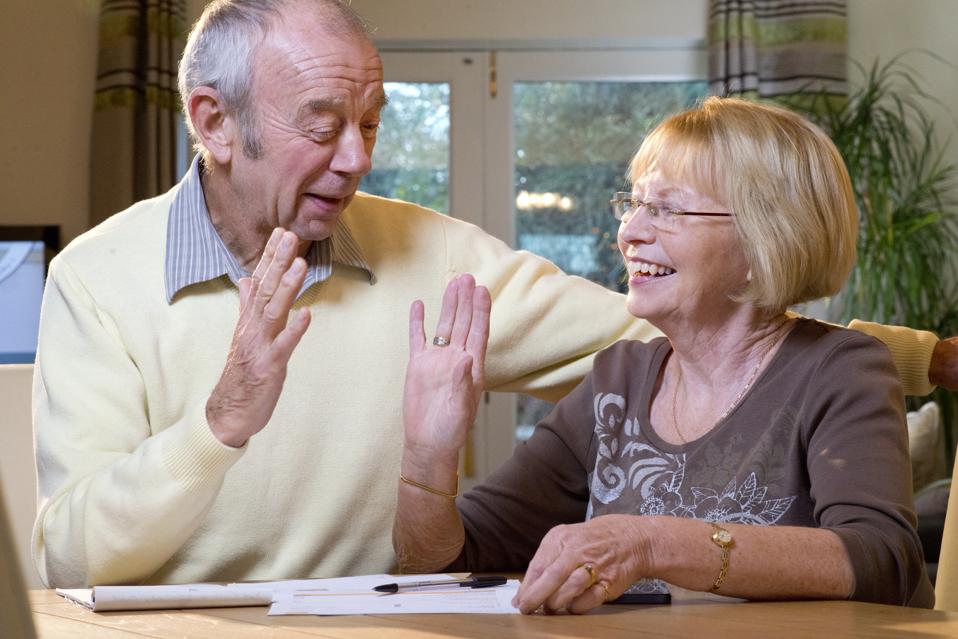 There’s nothing worse than watching your cash drain away in a downturn—especially if you’re near retirement and don’t have the time to bounce back. That’s why I’m hearing so much fear these days that 2020 could be another 2008.

Luckily, there’s a simple way to protect your nest egg. It involves 17 unique funds that let you hold the S&P 500 companies you know well, but with two key differences:

Big dividends like these are critical to your safety, because cash really is king: once it’s sitting in your account, it’s impossible for a meltdown to steal it away from you. More on these 17 funds shortly. First, let’s see where these “2008 redux” fears are coming from.

It’s no coincidence that I’ve been hearing more crash fears in the last five weeks—they come in a time when the biggest stocks out there—Microsoft (MSFT), Amazon (AMZN), Facebook (FB) and Berkshire Hathaway (BRK.A, BRK.B)—are up around 5% each, more than half as much as the stock market typically goes up in an entire year.

And then there’s Apple (AAPL), the world’s largest publicly traded company, which has had a market cap over $1 trillion for a long time. That hasn’t stopped it from soaring nearly 15% in just five weeks.

These gains are the result of two things: easing trade tensions and good economic news. S&P 500 firms are still seeing strong sales growth, with revenues up 3.2%, and America’s GDP is rising at about a 2% clip for 2019. That’s helped stocks finally recover from 2018’s bear market.

With an annualized return of about 8% over 2018 and 2019, stocks are finally rising at the rate they tend to over long periods (throughout its history, the S&P 500 has typically risen about 8% per year, on average, even with big pullbacks like the Great Recession). And if you bought stocks when they were crashing in late 2018, your personal gains will be much higher than that.

The clearest takeaway from this perspective is this: don’t sell!

If you’re still worried about a crash, you can give yourself extra protection with the 17 funds I just mentioned: they help you lock in future gains, hedge your downside and grab a massive income stream, too: I’m talking payouts of 8.1%+, with some yields as high as 12%.

These 17 funds all come from a group of funds called closed-end funds, or CEFs. If you’ve never heard of them, it’s probably because there are only about 500 CEFs out there, far fewer than the thousands of ETFs.

But as with ETFs, you can buy CEFs with any brokerage and trade them during market hours. The best thing about CEFs? The dividends! The average CEF yields 6.8%, while an index fund holding the S&P 500 only pays about 1.8%.

The specific type of CEF I’m talking about yields even more: 8.1% and up. It’s a “covered-call fund,” which boosts your income further by writing call options.

If you’re unfamiliar with options, they’re a kind of contract in which one party agrees to sell stocks in the future at a certain price. Covered-call funds are paid to sell these contracts on the stocks in their portfolios to speculators, and they pass the income from these sales on to investors.

Because of this extra income source, covered-call CEFs tend to pay even higher dividends than the already high-paying CEF universe.

With 8.1% yields, on average, covered-call funds are a great income-producing opportunity. And these funds are no laggards, either. Of the 25 covered-call CEFs out there, 17 have actually had returns above 8% annually over the last decade (or since their inception if they’re newer than that).

As you can see above, the best of these funds, the BlackRock Science and Technology Fund (BST), is up a huge 17% annualized, while yielding a nice 5.5% currently.

Other funds, like the Columbia Seligman Premium Tech Fund (STK) and First Trust Enhanced Equity Income Fund (FFA), are up a solid 12%+ annually while paying dividends of over 7% per year!

And if you really want big dividend payouts, check out the Guggenheim Enhanced Equity Income Fund (GPM) will hand you an almost unthinkable 12% yield while also using the covered-call trick to hedge its portfolio of stocks, of which 79% are S&P 500 companies and 10.5% are Nasdaq 100 companies.